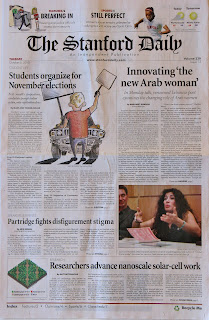 The Stanford Daily covers Joumana Haddad's talk "Innovating the New Arab Woman" today - the article  is here. The story gets most of page one in today's issue.

Joining Haddad on a panel were Esther Wojcicki, chairwoman of Creative Commons, Diana El-Azar, director of media, entertainment and information industries for the World Economic Forum, and Kirsten Mogenson, associate professor in journalism at Roskilde University. El-Azar and Mogenson served on the panel via webcam from Switzerland and Denmark, respectively.

The panel, co-organized by the Stanford Center for Innovation & Communication (SCIC) and the Center for Design Research and moderated by David Nordfors, founding executive of SCIC, began with Haddad reading a section of her book."

Click HERE to read the whole story on the Stanford Daily website.
Posted by David Nordfors at 12:43 PM